I didn't get much done on the farm house this week.  I've been working on Christmas gifts and exchanges.  So much to do, so little time.  This week I decided to make our television.  I was about four when we got our lovely black and white television.  Back in those days unless you had a great antenna you could only get two channels.  My older brother talked my Dad into letting him build an antenna.  He was ten years old but an avid reader of Popular Mechanics.  So we were lucky and got a few more channels. 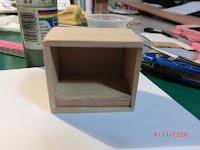 I started by making the box.  Old TV's weren't 70".  I think ours was 13".  Then I made the inside frame for the picture tube and made some legs. 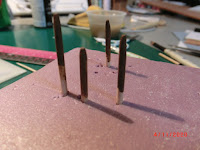 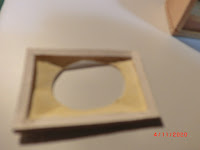 I think the most difficult part was making the curve for the tv tube.  My brother fortunately knew that it was an admiral TV.  I made a mid 50's Admiral TV. 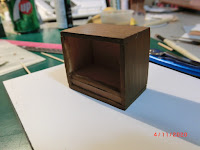 I stained the cabinet a dark wood color.  It probably was actually wood in those days.  Remember the test pattern anyone?  I think sometimes we saw the test pattern more that we saw TV programs.  But, I do recall watching Walt Disney, Ozzie & Harriet and George Burns. 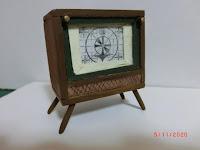 Once this part was finished I only had to make the rabbit ears. 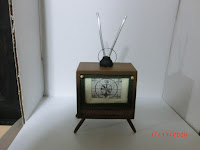 This was one of the quickest farm house pieces of furniture I've made yet.  Unlike the wringer washer which took a very long time.
at November 16, 2020

Miniflamobession
I have enjoyed many hobbies and crafts my entire life. I became hooked on cross stitch forty years ago. I am a retired Executive, however, I continue to do the office side of our hot tub business. I have two children and four grandchildren. My husband has one child and two grandchildren.